to the website of cat behavior consultant Bettina von Stockfleth. I do house visits in the whole area of Hamburg, in Lower Saxony and Schleswig-Holstein in order to help cat owners that have problems with their cats. It is my goal to restore well-being and harmony for cats and their owners. Issues I am dealing with (among others) and services I offer are: 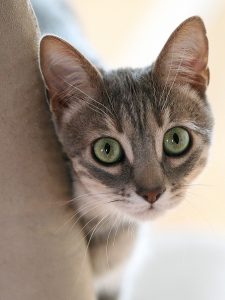 Animals have always played an important role in my life. In my childhood these were budgies, canaries, hamsters and later my own dog. As early as during elementary school I wanted to become an animal therapist – a wish that came true many years later.

I came upon cats, as so often in fateful encounters, completely surprisingly: In the middle of a deserted stretch of forest, a three-month-old tomcat sat down in front of me, meowing demandingly. This is how my cat had found me, and so Tharuk moved in with me, who was later joined by Hessian ex-stray Eddy and Spanish mini-macho Rodrigo.

The more I learned about cats, the stronger my desire became to learn more about these fascinating animals. I exchanged information with other cat owners and ardently read cat books. At the same time I started to get involved in cat welfare work.

After thorough research, I decided to train as an animal behavior consultant at the Swiss Akademie für Tiernaturheilkunde (ATN). I am also a supporting member of the very active international professional association IAABC (International Association of Animal Behavior Consultants). 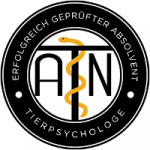 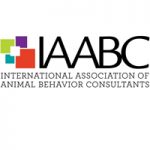 By participating in seminars and workshops, I continuously expand and update my knowledge. My university degree, i.e. the ability to carry out scientific work, as well as the fact that I speak English on native speaker level, come in handy, too. Many reference books and scientific studies are published in English only.

My journalistic work and animal behavior consultancy ideally supplement each other. Besides contributions to other publications, my articles as well as my “Ask the behavior consultant” column appear regularly in Swiss Katzen Magazin. In addition, I have written three cat books and translated the comprehensive work Cat Sense by renowned behaviorist John Bradshaw into German (Die Welt aus Katzensicht, Kosmos 2015). As a scientific consultant and editor, I also accompany the creation of numerous special interest books on animals “behind the scenes”.

Do you have any questions about my work?
Contact me!